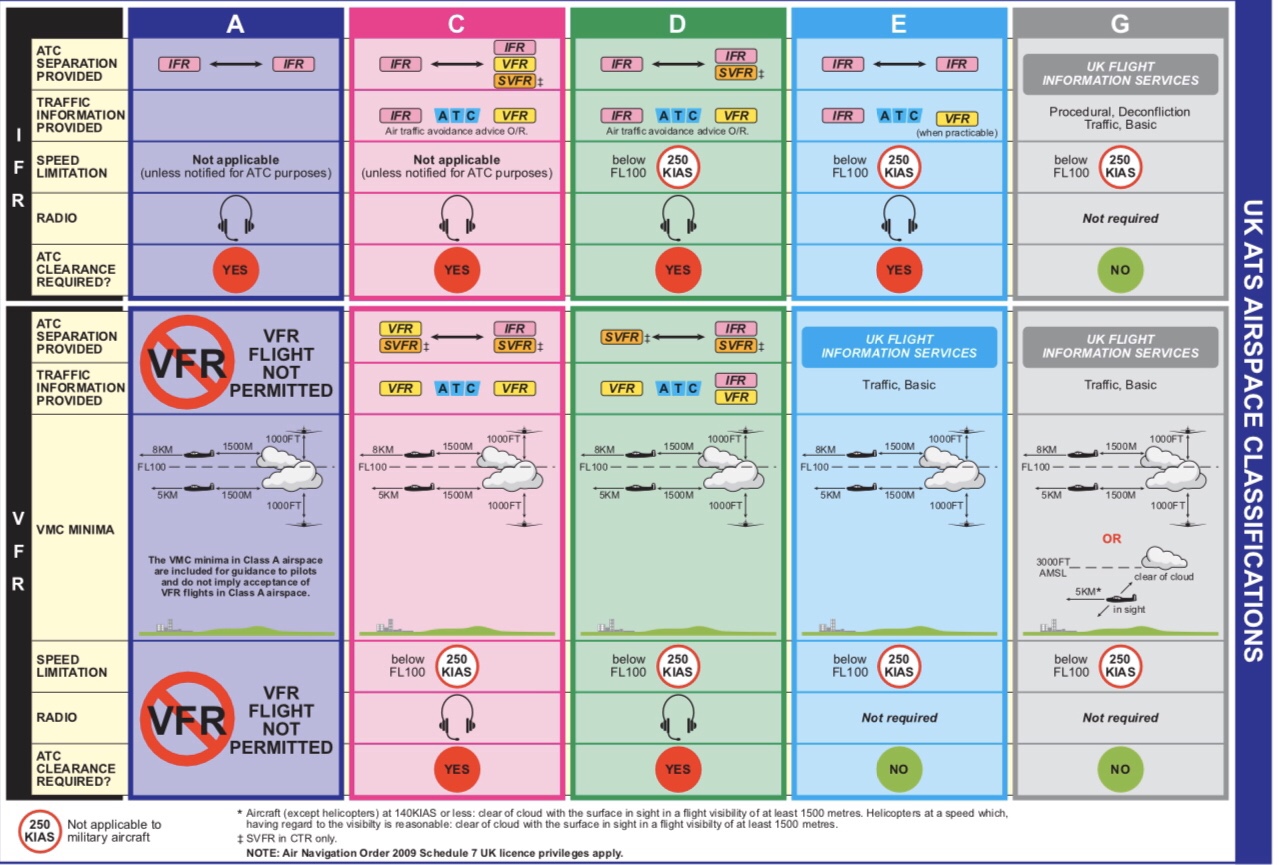 If you’ve stared at this graphic for hours trying to figure out how to make sense of it, you’re not alone. Below are a few tricks to cement into memory the difference in airspace classifications:

Tip 1: UNDERSTAND WHY THESE AIRSPACES ARE USED.

There are FIVE different airspace classifications used in the UK, and in the graphic they all look complicated and similar. However, three of these are pretty easy to understand.

This airspace doesn’t allow VFR flights at all. It’s the UK’s busiest airways such as Heathrow and Gatwick areas. So this is a simple NOT ALLOWED territory for most General Aviation flights.

This is a high level (19,500-66,000ft) airspace. VFR flights are permitted – but very unlikely. Permission (Clearance) is needed to enter this airspace and ATC instructions must be strictly adhered to.

This is usually areas around Aerodromes and Airports. A pilot on either an IFR or VFR flight needs to gain permission to enter this airspace.

…We’ll come back to this later.

This is the only uncontrolled airspace in the UK. Pilots are free to fly when and where they wish (within laws and reason). This airspace is usually well away from licensed Aerodromes and busy flight paths. It makes up a large portion of the country.

You’ll be spending most of your time flying in Class D (Aerodromes) and Class G (uncontrolled) airspace.

So what’s the deal with E?

That just leaves airspace E, which is kind of a mashup of D&G. So, how is it characterised? For this, let’s split VFR & IFR rules:

VFR: Class E airspace is similar to CLASS G, with the difference being flights under 3000ft need to have sight of the surface and clear of cloud in Class G (that nugget of info will probably be in your exam…)

Below is another way to interporate Airspace classes. Hopefully this helps!

And just if you’re wondering about B&F airspace’s:

CLASS B – the airspace class definitions were set up by ICAO as a way of unifying international air travel. The UK simply has no need for this classification, but it is used in other countries, namely the USA, for areas around busy airports that do allow VFR flights.

CLASS F – There used to be a class F airspace which covered a large portion of Scotland, but that was shelved in 2014 due to the UK lining up with the EU. The majority of class F airspace was changed to Class E.